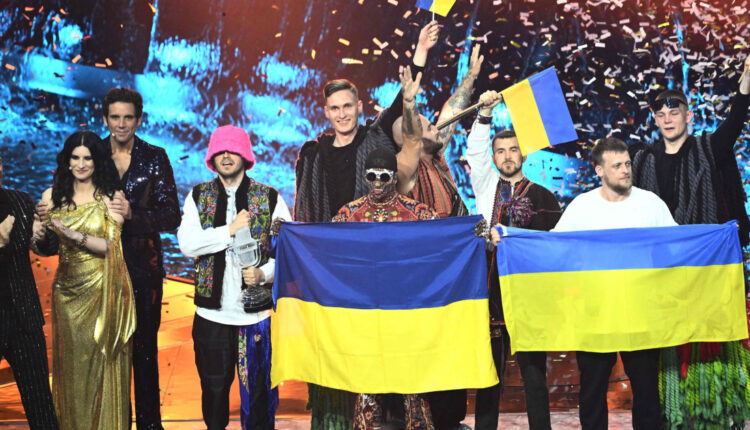 Ukraine was crowned the winner Saturday of Eurovision Song Contest.

The contest tweeted the winner Saturday.

Winning Ukrainian band Kalush Orchestra’s “Stefania” was written as a tribute to the frontman’s mother, but became an anthem for the war-torn country.

“Indeed, some stuff in here was written long before the war, and it was dedicated to my mother,” frontman Oleh Psiuk told The Associated Press.

“After it all started with the war and the hostilities, it took on additional meaning, and many people started seeing it as their mother, Ukraine, in the meaning of the country,” he continued. “It has become really close to the hearts of so many people in Ukraine.”

The contest’s Ukrainian commentator, Timur Miroshnychenko, did his job from a bomb shelter.

“This year, I think it’s more symbolic than ever because, of course, cause on 24th of February not one of us was thinking about Eurovision or stuff like that,” he said before Saturday’s announcement of a winner.

In February, the European Broadcasting Union, which organizes the contest, said Russia would be allowed to participate despite the country’s attack on Ukraine. However, less than 24 hours later, organizers reversed course and said no Russian act would be a part of the show.

“The decision reflects concern that, in light of the unprecedented crisis in Ukraine, the inclusion of a Russian entry in this year’s Contest would bring the competition into disrepute,” a statement read.

Favorite in Wisconsin Democratic Senate primary calls in the…

DHS officials concerned they may need $2 billion to deal…

Teacher on leave after assignment depicts Barack Obama next…

Teacher on leave after assignment depicts Barack Obama next to monkeys